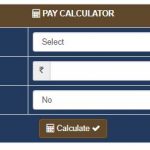 Bonus orders 2015 – Ad-hoc Bonus for Rajasthan Govt Employees Following the Central Government, the State Government of Rajasthan has declared ad-hoc for its employees a head of Deepavali festival. The Finance Department issued orders for granting ad-hoc bonus equivalent to 30 days emoluments at … END_OF_DOCUMENT_TOKEN_TO_BE_REPLACED

No Government Jobs for Smokers Rajasthan State Government has announced that government jobs wouldn’t be given to those who smoke or consume tobacco. Only non-smokers and non-tobacco users will be given employment in state government services. BJP, under the leadership of Chief Minister Vasundara … END_OF_DOCUMENT_TOKEN_TO_BE_REPLACED

DA Orders issued by Finance Department of Rajasthan Cabinet Committee approved 7% additional DA for CG Employees and Pensioners form July 2014 on 4th September, but yet to issue any orders for payment by the Finance Ministry. The Rajasthan Government has decided to hike 7% additional DA for its … END_OF_DOCUMENT_TOKEN_TO_BE_REPLACED