Affected Pre-2006 Pensioners will get arrears from 1.1.2006 due to qualifying service issue – PCDA Circulars on 8.4.2016 The Principal Controller of Defence Accounts (Pensions) issued an order regarding the arrears payment for the affected pre-2006 pensioners with effect from 1.1.2006. “All … END_OF_DOCUMENT_TOKEN_TO_BE_REPLACED

Biggest news of 2016 for Central Government pensioners Most readers would be aware that the orders regarding calculation of pension of pre-2006 retirees based on minimum of pay within the pay band for each separate grade/rank and not on minimum of the pay band itself, with arrears from 01-01-2006 … END_OF_DOCUMENT_TOKEN_TO_BE_REPLACED 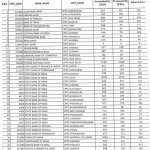