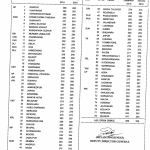 AICPIN FOR JANUARY 2016 – EXPECTED DA FROM JULY 2016 BEGINS..! All India Consumer Price Index for Industrial Workers on Base 2001=100 The Labour Bureau, under the Ministry of Labour and Employment has now released the AICPIN points for the month of January 2016, the index stands at 269. The first … END_OF_DOCUMENT_TOKEN_TO_BE_REPLACED