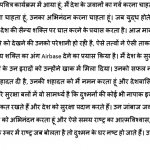 Terrorist Attack at Air Force Station Pathankot – PM condemns Intelligence inputs had been available of a likely attempt by terrorists to infiltrate into the military installation in Pathankot area. In response, preparatory actions had been taken by the Indian Air Force (IAF) to thwart any such … END_OF_DOCUMENT_TOKEN_TO_BE_REPLACED