Hike in 6% DA for J&K employees As per the media news, the state government of Jammu and Kashmir has declared 6% of additional dearness allowance for its employees with effect from 1.1.2015. After the announcement, the Dearness Allowance percentage hiked to 113% from the existing level of … END_OF_DOCUMENT_TOKEN_TO_BE_REPLACED 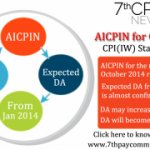 Expected Dearness Allowance from January 2015 for Central Govt Employees and Pensioners, almost confirmed 6% increase… Expected DA from Jan 2015 is on fourth step, no change in the index of CPI(IW) for the month of October 2014, stands at 253 only. Increasing in Central DA is likely to be 6% from … END_OF_DOCUMENT_TOKEN_TO_BE_REPLACED