No. 17-31/2016-GDS
Government of India
Ministry of Communications
Department of Posts (GDS Section)

The undersigned is directed to convey the approval of Competent Authority on the following Guidelines on the subject of Limited Transfer facility for all categories of Gramin Dak Sevak in supersession of all previous orders issued on the subject: –

(i) The maximum number of chances to be provided for male GDS shall be TWO chances and THREE chances for female GDS in entire term of
engagement.
(ii) The GDS may apply for transfer to a maximum of TEN GDS posts, in order of preference, in one Division at a time. The transfer will be at own cost of the GDS.
(iii) Refusal to accept the Limited Transfer order shall be construed as one chance of Limited Transfer availed by GDS. The GDS, however, may have the option to withdraw the request within 15 days of the submission of the application for transfer, which will not be counted as a chance availed under the Limited Transfer facility.
(iv) Transfer request may be submitted anytime during the year, however, the GDS should have completed minimum engagement period of ONE year from the date of regular engagement on CDS Post on the date of transfer request.
(v) Mutual Exchange transfer facility shall be available to all CDS on completion of ONE year engagement period. Mutual exchange cases can be done immediately on receipt of application subject to fulfilment of eligibility conditions.
(vi) The transfer order shall take effect after all verification formalities viz Caste. Education and Police verification report etc. have been completed.
(vii) Transfer request of GDS who are under put off duty or against whom any disciplinary action. Police case or Court case is pending will not be entertained.
(viii) Past engagement period will be counted for assessing the eligibility for appearing in departmental examination as well as for annual increment. CDS will not have any claim to go back to the previous engagement/recruitment Unit/Division. However, this would not act as a bar for applying to that old post old unit under the provisions of this OM.
(ix) When a CDS is transferred at his her own request and the transfer is approved by the competent authority, she/he will rank junior in the seniority list of the new unit, to nil the GDS of that unit who exist in the seniority list on the date on which he she joins the new unit, except in case of transfer within the same engagement/recruitment Sub Division/Unit /Division.
(x) The GDS can he transferred on her/his request in following circumstances:-

(xi) There will not be any drop in TRCA slab on account of a request transfer and numbers of increments earned by GDS will be retained.

2. Competent Authority for approval of Transfer: –

3. Manner of Transfer: –
(i) An application may be submitted to the Divisional Head on a prescribed Proforma attached herewith as Annexure-I. The Divisional Head will obtain vigilance clearance/Engagement particulars from head of current engagement Unit.
(ii) Necessary action on the applications received shall be taken in following manner adhering to the timelines mentioned herein-

4. The above instructions will come into effect from the date of issue of this OM.
5. Hindi version will follow.

Guidelines on Limited Transfer Facility for All Category of GDS – DoP OM Dated 15.07.2021 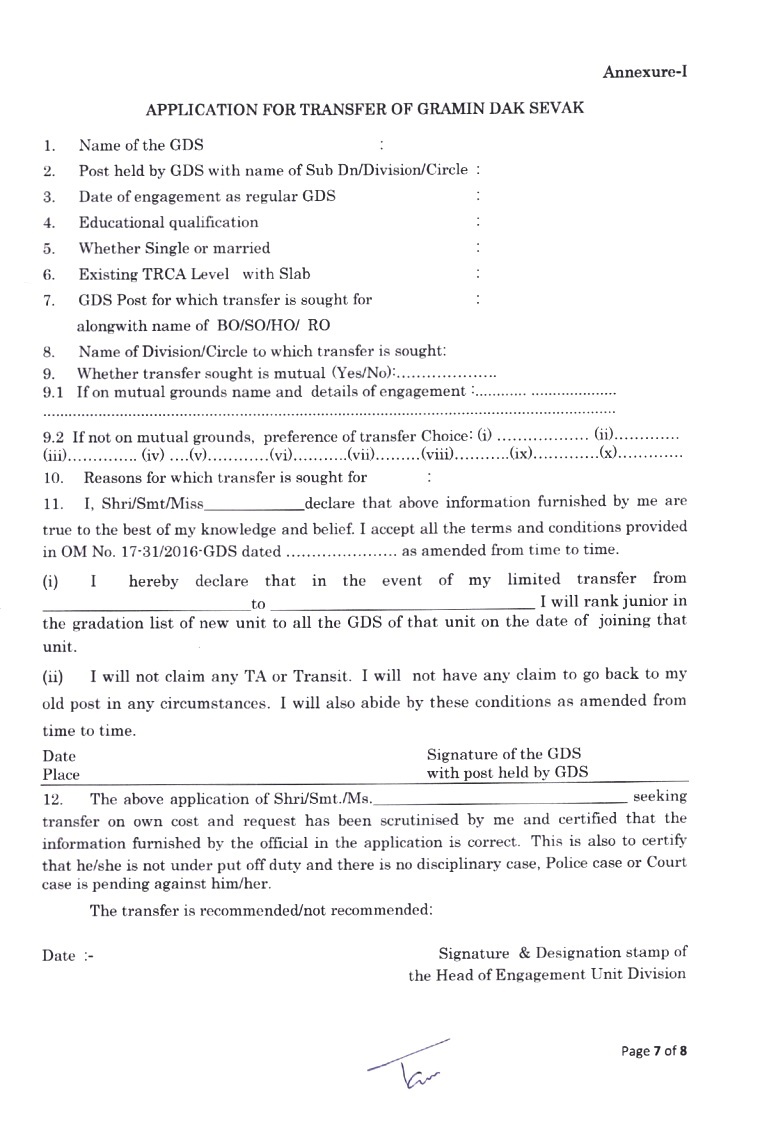 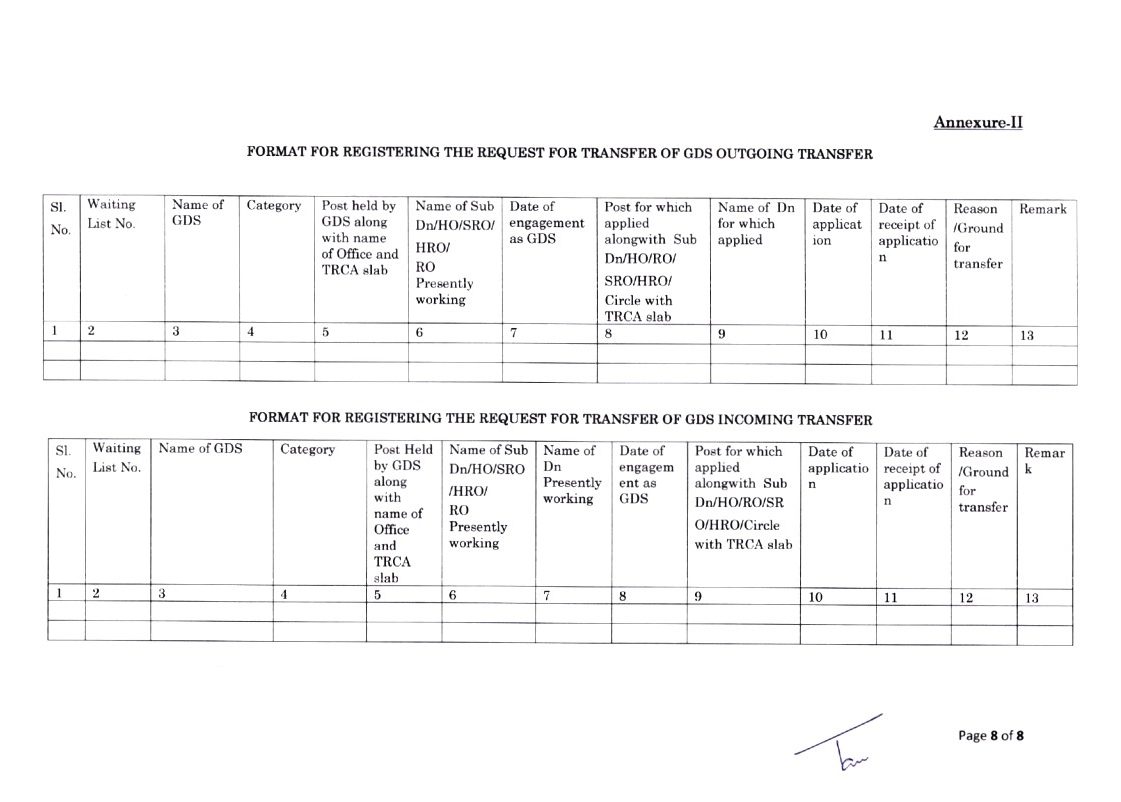