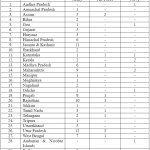 Re-Employment of Ex-Servicemen As per Department of Personnel & Training’s OM No. 36034/27/84-Estt(SCT), dated 2.5.1985, on an Ex-servicemen joining the Government job on civil side after availing of the benefits given to him as an Ex-servicemen for his re-employment, his Ex-servicemen status … END_OF_DOCUMENT_TOKEN_TO_BE_REPLACED

Ex-Servicemen Contributory Health Scheme Some empanelled hospitals have stopped providing services in the recent past citing reasons of delayed payments, excessive deductions and low CGHS rates. 384 empanelled facilities have not renewed Memorandum of Agreement with ECHS till date. 69 empanelled … END_OF_DOCUMENT_TOKEN_TO_BE_REPLACED