Aadhar enabled Biometric Attendance System for marking attendance “As per extant instructions, half-a-day’s casual leave should be debited for each day of late attendance, but late attendance upto an hour, on not more than two occasions in a month, and for justifiable reasons may be condoned by the … END_OF_DOCUMENT_TOKEN_TO_BE_REPLACED 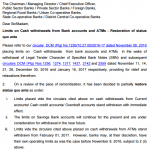